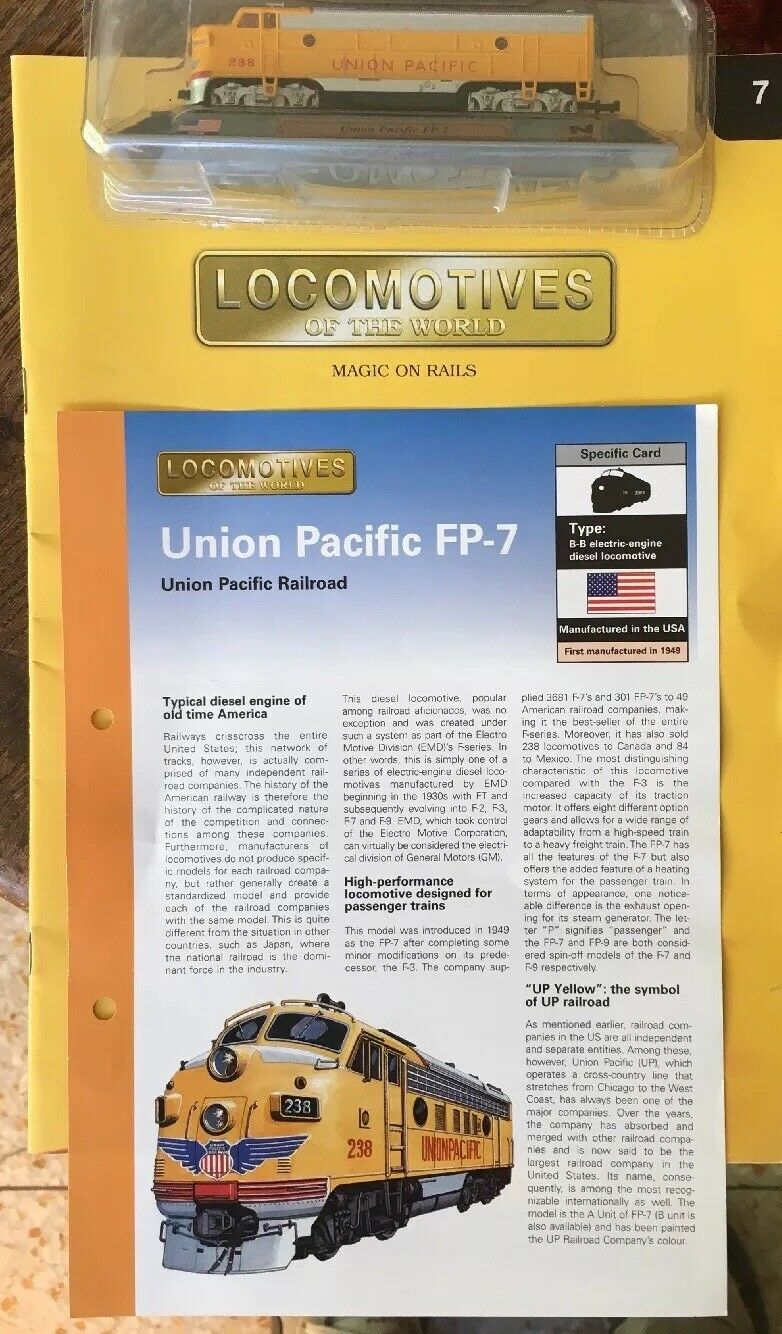 
Model Information: The unpowered display model of the EMD FP7 appeared in the collectible series Locomotives of the World from the Del Prado publishing house. In Europe as a Union Pacific model, in the USA also in the Warbonnet livery of the Santa Fe. The nicely shaped plastic body is screwed to a metal frame, the two movable bogies are also screwed on. All screws are covered with locking varnish. The warning on the packaging "Do not place on powered track, metal wheels will cause short circuit" is not correct. The wheels have plastic axles and will not cause a short circuit. The two-piece and for such a model quite detailed bogies are glued together. Unfortunately, some of the axles have been glued as well, so the model does not roll. The model has no couplers, but the metal frame has at least a front mount for a coupler. The weight of the model is 77 grams.

For an inexpensive display model, the shell is surprisingly nicely done. At first sight it seems to be a copy of the modeler version of the metal case of the FP7 from Model Power, but in detail it shows some differences, e.g. in the design of the ventilation grills, the strongly simplified sand fillers and the roof superstructure of the steam generator. This is the version without Dynamic Brakes. A cover is inserted into the roof at the appropriate place, just like on Model Power FP7. The roof vents are a bit simple, the replicated rivets are much too large. The two signal horns are attached, the number boards inserted. Except for the window of the rear door, all windows are glazed.

The colors of the Santa Fe model are very nice, but the paint job is not always very accurate. Small details that are only noticeable on close inspection, such as the WATER lettering, have also been printed on. The lower front headlight was provided with a silver ring, this gives a very nice front view. The paint job of the Union Pacific model is not so nice, because here the yellow is just solid colored plastic.

The Santa Fe FP7 is quite suitable for standing in the depot of a model railroad layout and will only be noticed on closer inspection due to the missing coupler as a cheap display model. The Union Pacific model is unfortunately unsuitable due to the colored and unpainted yellow plastic.

The Union Pacific FP7 model was also available in the collectible series of the Spanish Club Internacional del Libro (CIL) and in the series Reisen auf Schienen of the German Weltbild-Verlag. Both of these series featured a dummy knuckle coupler on the front end and a Rapido coupler on the rear end.

Del Prado and CIL shipped the locomotive in blister packaging and bolted to a short piece of track, while Weltbild-Verlag shipped it in cardboard packaging. All three came with a short description of the prototype.