Please help support TroveStar. Why?
Collectors value this item at an average of 85.00 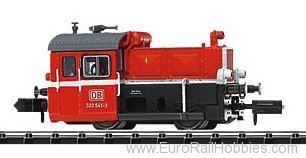 Model Information: It has a miniature can motor. 2 axles powered. The headlights are maintenance-free LEDs and can be controlled digitally. The locomotive has separately applied step boards and grab irons. Length over the buffers 40 mm / 1-9/16"