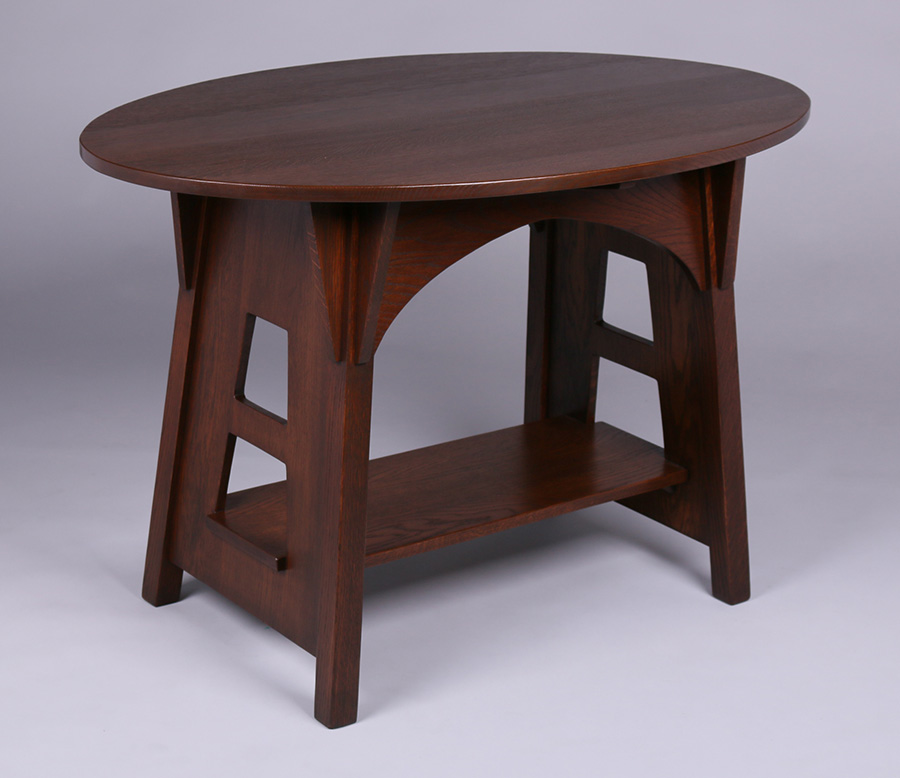 Tables are usually secured at intersections by joints called splines to strengthen the severe straight lines and plain surfaces. Handles and any trimmings are made from copper or iron. Tables can also include additional features such as drawers, extensions, and shelves.


History: Charles P. Limbert (1854-1923) was founder of the "Charles P. Limbert Furniture Co.". Limbert's quartersawn oak furniture is characteristic of the Arts and Crafts movement in America; some of it looks similar to that produced by other makers of the day. Many of the company's better pieces, however, are pleasingly unique, are solidly constructed and stand on their own merits. Compared with Stickley's work, Limbert's designs were typically less severe and more visually interesting, usually achieved through the use of cut-outs and other elements inspired by such diverse influences as English Arts and Crafts, Dutch folk furniture, Scottish architect/designer Charles Rennie Mackintosh, and the Vienna Secession. If there is any criticism of Limbert furniture it is that some pieces have been described as "underscaled and malproportioned". That appears to be true of certain groupings within his Arts and Crafts line, but the best examples can command prices similar to Stickley's work. One of Limbert's most notable pieces, a jardiniere, was included among Stickley and other craftsmen's work in the 1973 show at the Art Museum of Princeton University that began the Arts and Crafts Revival.

Limbert furniture was among the furnishings of the Old Faithful Inn in Yellowstone National Park in 1906. Several wash stands remain in the Old House section of the Inn, and a number of pieces of Old Hickory furniture, a line represented by Limbert, are still in use.

Charles Limbert was born in Linesville, Pennsylvania in either 1854 or 1856, the son of cabinetmaker and furniture dealer Levi H. Limbert. After moving with his family in 1866 to Akron, Ohio, he later learned the furniture business in the 1870s at his father's store. As a young man in Akron the first business he tried on his own was in the carriage trade. After leaving his adopted hometown in the mid-1880s he moved west and began his career as a furniture salesman. Charles started making chairs in Grand Rapids, Michigan while continuing to distribute furniture made by others. Limbert established a factory in 1902 where he designed and built what he termed "Dutch Arts and Crafts"-style furniture and light fixtures. In 1906 he opened a factory in Holland, Michigan, which he regarded as a more healthy environment for his workers. Limbert continued to manage his company until 1922, when poor health prompted him to sell his share in the company.