189.252 of these sold for an average price of: 189.25
Click to see the details
history
This item is not for sale. This is a reference database. 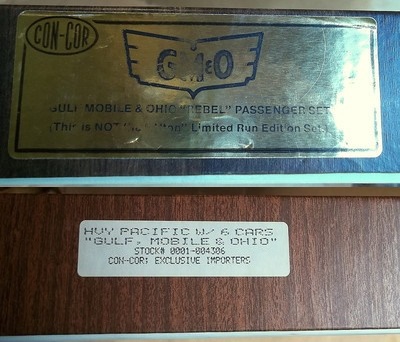 Specific Item Information: Gulf, Mobile & Ohio "Rebel" passenger set: one steam locomotive with 6 heavyweight cars.
Very similar to Limited Edition Set #2 "The Alton Limited", but the cars are "Gulf, Mobile & Ohio" instead of "Alton Limited". Box is marked "(This is NOT "The Alton" Limited Run Edition Set)".
Though being sold in a wood-grained cardboard box, this set is not considered as a Limited Run Collector set.