Specific Item Information: without containers.
The Koki 200 freight car appeared in 1999 and is active in container transportation of JR freight. It can carry two 20-foot containers or one 40-foot container, and is a slightly shorter 15m car. 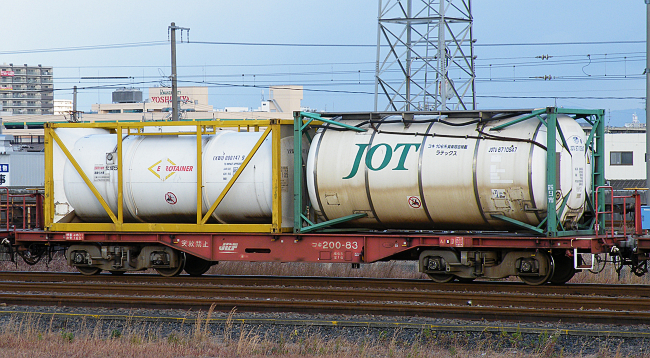 The KOKI 200 series, introduced in 2000, was designed to carry a pair of ISO 20-foot containers exceeding the allowed weight limit of the 100 series, allowing transport of two containers up to 24 tons each (versus to the 20 ton/container limit of the 100 series). This allows, among other things, use of ISO tank containers for hauling sulfuric acid. A single container of up to 30.48 tons can also be loaded. Unlike most KOKI, there is no provision for loading 12-foot domestic containers. These are painted red with gray trucks.